Dear god, when will it end? 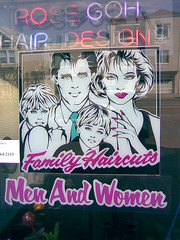 Who Knew Nagel Did Family Portraits?
Originally uploaded by njudahchronicles.com.


For those of you who don't remember the 80s, Patrick Nagel was an inexplicably popular graphic/ poster artist best known for designing the cover of Duran Duran's "Rio" album and inspiring scores of regrettable tattoos. The period in which it would have been trendy to use his art to brand your hair salon would have been 1981-1983 if the world were just and kind.

seriously, how long is it going to take for hair and nail salons to stop using these faux-Nagel graphics? If there still a factory making these damn posters, or are all these 25 years old? I saw one in Ballard the other day and it made me realize there's never been a time since I started paying for my own haircuts that I have NOT seen these images. Where do they come from? Why do they seem to appeal to Asian salon managers so much? Are they also used outside of the US?

Open to: All, detailed results viewable to: All. Participants: 18

How long until faux-Nagel posters are totally extinct as advertising art?