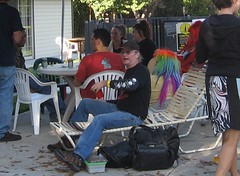 IMG_853.JPG
Originally uploaded by lara7seven.
Here is a picture of an artcar friend, Tim. I met him and his wife Joanne in 2006 at the San Francisco Art Car fest. They are very cool people, and live in Portland. I have not been in touch with them since Fall 2006, but keep saying I should call them next time I'm in Portland.

So Paul and I went to Portland this weekend. I was telling him about Tim and Joanne as we drove past their neighborhood. After eating lunch, Paul and I checked into our swanky downtown hotel. And lo and behold, I see Tim in the elevator! At least, I think it's Tim. So I ask him:

Me: "Is your name Tim?"
Tim "Yes" (looks panicked, doesn't appear to recognize me)
Me: " You have a wife named Joanne?"
Tim: "No". (looks more uncomfortable)
Me : (now uncertain that I have the right guy, or fear that he and Joanne have split up): "you don't have an art car?"
Tim: "No."

I apologize, say I thought you were someone else, Tim asks us for our floor and pushes the button, we exit.

The funny thing is, when I met Tim in 2006, I thought he looked like Tim Robbins, and asked him if anyone had ever told him that. He said no. And while I thought it somewhat implausible that someone who lived in PDX would have any reason to be in a hotel in PDX, it's certainly less plausible that Tim Robbins is staying in your hotel in Portland and appears in the elevator hours after you speak of Tim and Joanne. Paul, of course, recognized him immediately and was mortified when I approached him (until he realized who I thought it was).

We saw him at the front desk Sunday as we checked out, and I thought about apologizing, but figured I'd already unwittingly crossed that line where non-celebrities are supposed to leave famous people alone when they're trying to be incognito and I should keep my distance to avoid further embarrassment.

Hours later, wandering around Hawthorne past a shop specializing in things you can buy for your cat or dog, Paul overhears some hipsters whispering to each other "Hey, I think that was Tim Robbins" as a tall man enters the shop.

So Tim (and Tim), I apologize. I'm really not the type of person to harass actors that happen to cross my path, but if you look at the picture (not a great likeness, but the only photo I have of Tim), I think you can see my error was genuine and not an excuse to be a creepy stalker.
Collapse